Mapping a Pathway to Improved Well-Being for Young People

A clear understanding of how change happens for people living in poverty is central to effective development interventions. In an earlier blog post, we discussed the need to unpack “the black box” between using financial services and improved well-being to understand more clearly the channels through which accessing and using financial services can support development objectives. The blog also introduced CGAP’s effort to develop a nuanced theory of change (TOC) for how financial services could lead to well-being. This work aims to combine our understanding of the impact evidence and our understanding of the constraints faced by different client groups to map out a realistic pathway for the kind of change that should be expected and ultimately measured.

As we developed this overall TOC, we asked ourselves whether it made sense to create separate TOCs for particular segments or demographics, such as women and youth, as we are well aware that barriers and opportunities differ across groups. Ultimately, we decided to build a universal TOC (pictured below) that would describe an overall pathway toward improved well-being, capturing and reflecting multiple lived experiences. The framework delineates three drivers of resilience and opportunity for low-income people around the world: financial resources, human capability and physical capabilities. However, we recognized that it would be possible to leverage this universal template to identify how preconditions or assumptions differ for specific groups.

CGAP’s recent paper, "The Role of Financial Services in Youth Education and Employment," makes the case that financial services can play an important role in improving educational opportunities to build job skills among people ages 15 to 24. How can using this TOC help us to better understand the links between financial services and youth’s learning and earning, and how can it draw attention to the constraints young people face? Outlined below are key findings on how the three drivers of resilience and opportunity relate to youth. 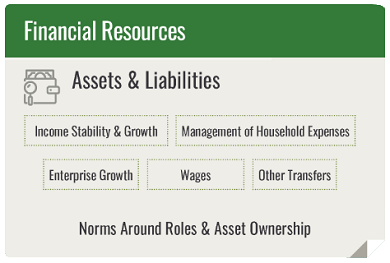 1. Young people tend to have fewer financial resources than adults, so they need to overcome more constraints on this key driver of well-being. Poor people’s financial resources are themselves an outcome of income and expenses. For young people, the income side is particularly constrained. Young people in many markets face exclusion in labor markets. Globally, they are significantly more likely to be unemployed or underemployed. In the absence of high-quality job opportunities, youth often piece together informal work or become micro-entrepreneurs, as do many low-income people around the globe.

On the expense side, young people in developing countries often live at home until they form their own families. Thus, they are less likely to be directly responsible for managing household expenses. Girls and young women are likely to be further constrained by unremunerated family obligations, such as unpaid care for siblings or the elderly, and time-consuming responsibilities, such as fetching water or firewood. These obligations reduce young women’s ability to seek paid employment. As soon as young people marry, their responsibilities for managing household expenses mirror those of adults, though it may be a more daunting task due to their income-side constraints. 2. Young people are more likely than adults to be familiar with technology, which could help them seize opportunities linked to the digital economy. While the number of young people not in school or employment remains high — 1 in 5 are out of school, and more than 1 in 10 are unemployed — the ease with which young people adapt to digital technologies may put them at an advantage for the jobs of the future. GSMA estimates young people’s global phone ownership rates at 85 percent, and ITU puts their internet usage rates at 70 percent (67 percent for youth in developing countries). Young people’s greater access to information and social networks improves their ability to learn new skills and qualifications. However, societal constraints sometimes prevent girls and young women from owning or accessing phones and the internet. 3. Young people’s physical mobility is influenced by their parents and prevailing gender norms. Since most young people live with their parents until they marry, their access to health services, electricity, water and sanitation are driven by their parents’ choices and investments. Once they are independent, their ability to live in communities where such services are readily available or to install such services depends on their financial resources. There is a significant difference between how this issue manifests in the lives of men and women given the social norms around the mobility of girls and young women, particularly in South Asia and some Middle Eastern countries. Household responsibilities, limited mobility outside the home and norms around interacting with men in public restrict many girls’ and young women’s ability to improve their well-being.

Given the constraints and opportunities experienced by young people, including their lack of financial resources, restrictions on their physical mobility and their high levels of digital awareness, CGAP’s paper is right to emphasize that digital financial services can and should support learning and earning for youth

. More experimentation is needed to overcome the constraints that exist for young people in accumulating financial resources and to help young people strengthen and leverage their technological skills in the digital economy.

This post is part of CGAP's "Financial Services in Youth Education and Employment" blog series. The series explores the challenge of youth financial inclusion from a variety of angles, including the ways young people are using digital financial services, strategies that financial services providers are using to reach more young customers, and the changing role of funders in this space. The Path to Financial Health Begins in Adolescence

It is critical that youth financial inclusion programs tailor interventions based on young people's life stage to achieve long-term impact on financial health. By providing a combination of financial and nonfinancial services to over 16,000 smallholders, a social enterprise in northern Nigeria is harnessing the power of agriculture to create jobs for youth and improve livelihoods.