We have all heard about the devastating damages Super-Storm Sandy left in its wake in the United States and the problems associated with the recovery. But maybe you aren’t aware of the devastation it wrought in Haiti. Three long days of torrential downpours and strong winds destroyed most of Haiti’s fragile agriculture and put 1.5 million Haitians at risk for hunger, according to the United Nations.

In the aftermath, Fonkoze—Haiti’s largest microfinance institution and the only one that offers catastrophe microinsurance to its 65,000 clients—faced more than 17,000 claims to review. These claims document that more than 50% of our clients’ merchandise was damaged from floods and homes were left uninhabitable.

Guerda Pierre was one of the victims. The home she shares with her three children and mother was completely flooded, and all her merchandise was destroyed. In addition the plantain trees and beans in her garden could not be harvested. Guerda had paid $5.30 for her insurance policy with Fonkoze when she received her 6-month loan of $176. That’s 3% of her loan value paid one-time at the start of the loan for 8 months of coverage. Following the storm she received a cash payment of about $59, the cancellation of her debt with Fonkoze, and a new loan, which she received before Christmas, the busiest season of the year for her. As you can imagine, she and many others like her are now big fans of the insurance program. 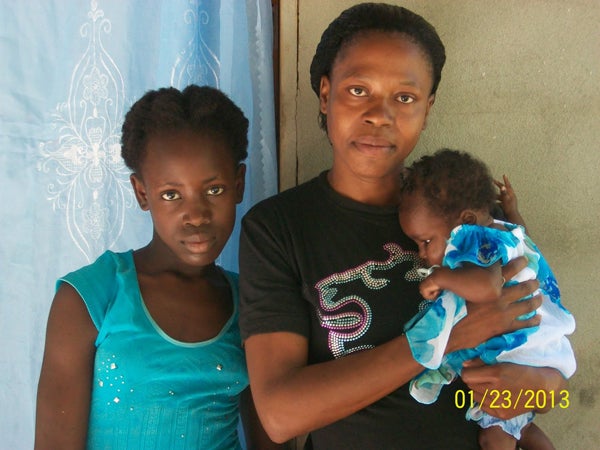 In order to implement this program, Fonkoze spent the year after the January 2010 earthquake in preparation. For me there was no other option. I have watched the same woman make her way up the staircase out of poverty three times, only to lose everything overnight due to a hurricane or earthquake – first in 2004, then in 2008 and again in 2010! What was the point of continuing with microfinance if our clients were successful in creating assets but we could do nothing to help them protect those assets?

The journey required me to learn a whole lot more about insurance than I ever, frankly, wanted to know. We put together a stakeholder team consisting of (1) Mercy Corps, a global relief and development agency, (2) Swiss Re, a leading global reinsurer, (3) Caribbean Risk Managers Ltd, a risk analysis company, (4) GC Micro Risk Solutions, a division of Guy Carpenter & Company, LLC, (5) Alternative Insurance Company, the first Haitian insurance company to offer microinsurance, (6) the U.K. Government’s Department For International Development, (7) the Caribbean Development Bank and (8) the Swiss Agency for Development and Cooperation. And, we actually created a new (re)insurance company licensed in Barbados named the Microinsurance Catastrophe Risk Organization (MiCRO).

Although the establishment of MiCRO was a big challenge, the challenges since then have proven even more demanding. Our clients, for the most part, appreciate the program—as evidenced by the lowest drop-out rate in our 15-year history and our solid 10% growth rate in the first year. The problem is that the first two years of the program happened to be two very bad years. There were a total of four major events in 2011, including two hurricanes and two other major rain events. In the end, we paid almost 6,800 claims totaling $1.9 million but we received from MiCRO only $1.6 million.

Our concerns only increased during the second year we offered the insurance. While the policy worked well for hurricane Sandy – the insurance paid out $3.3 million which covered all 12,000+ victims – it did not work well during Hurricane Isaac. The payout for Isaac was $227,000, but our 10,300 claims, after assessment, totaled almost $2.9 million!

Clearly, we had a major problem.

The challenge was untangling whether the problems stemmed from  our parametric methodology, the triggers that had been set, our claims assessment process, or the benefit package we provided victims. Because the policy limits for damages caused by rain were completely depleted after Sandy, we were forced to stop renewing clients in order to determine whether there was an obvious way forward or we would have to abandon the program altogether. We anticipate that we won’t be prepared to resume the program until after this year’s hurricane season.

Fortunately for us, not only our original stakeholders but also even some new ones like the International Finance Corporation (IFC) have stood by us to ensure the institution didn’t go under, and everyone is working hard to redesign the program with few aspects left untouched. First, it’s clear we need to get the program off our balance sheet. Second, there are problems with the functioning of the parametric methodology but they can likely be addressed and improvements are being put in place. Third, our benefits were set too high: the combination of the cash payout and the debt cancellation were just too much to finance given the number of victims. Fourth, we need to rethink how we define eligibility – do we need to require full losses rather than partial losses of merchandise and home? Fifth, a redesign of our claims assessment process is in order.

The biggest challenge though is communicating these changes to 65,000 women spread all over the most rural, isolated regions of the country, many of whom are illiterate. The majority of them have been convinced of the necessity of insurance, but now we have to make certain they understand that the insurance is not in force today. We are working hard to help them better understand the risks they face and how to manage them  and I am convinced that requires a number of different tools be made available to them. Insurance is one of the most important. We haven’t gotten it right yet, but I am not giving up yet either.

------ Anne Hastings has been leading Fonkoze – Haiti’s largest microfinance institution – since May 1996.

Keep Your Insurance Close, and Your Friends and Family Closer

Throughout our research, we are seeing that friends and family are often a preferred source of support when a financial shock strikes. So, what is the role of microinsurance.

CGAP's recent blog series on microinsurance brought together over a dozen thought leaders and confirmed that microinsurance is an important service to help poor households protect their fragile livelihoods and lives against inevitable risks and unexpected catastrophes. What Do We Know about the Impact of Microinsurance?

Knowledge is still patchy but key insights are emerging on the impact of microinsurance products including financial protection and better access to health care.
View Full Series

Great post Anne, I was wondering how things had gone with MiCRO this last few years. My own personal experience of the TRMM dataset for use in triggering events on nearby islands lead me to worry that it is not picking up these events and therefore may not be a suitable dataset for this purpose but I was also surprised that Fonkoze had taken the basis risk onto your balance sheet by offering the clients a product without knowing that the reinsurance would pay out. Looks like you got a whack from Isaac as a result which is a shame. Would it have been better to cover your portfolio and then for your team to decide which loans to restructure or write off depending on the payout you recieved from MiCRO?

I was also worried about the ownership of MiCRO. Lots of people with a desire in making this work but Fonkoze was the only one in the firing line in reality which can lead to a situation where a product is implemented without sufficient anchoring in the reality on the ground because only one voice (Fonkoze) has real skin in the game.

Thanks for writing a great, honest post - much appreciated!!

Thank you so much for your comment. I'd like to clarify that MiCRO itself was the first in line to take on the basis risk, and it did pay out up to its limit for rain -- $500,000.00. It's just that it was not enough in the case of Isaac.

At the moment, we are doing exactly what you suggest -- insuring our portfolio and then restructuring/writing off depending on the payout. But in my opinion it is ultimately very important for the client to understand their need for insurance and to pay for it. At the same time, they also need to understand that no insurance policy will transfer ALL the risk -- it is up to them to take responsibility for reducing their risks as well. I think we made real head-way in the two years we tested the product, and I hope eventually we will be able to put the insurance again in their hands -- but not until we get the product right this time!

Dear Anne,
Two questions:
1) How do you protect MiCRO against fraud? Since we are talking about small loans, and inventories that are perishable or volatile in nature, how do you ensure that claims made (supposedly for losses due to hurricane and floods) are actually legitimate?
2) Is MiCRO an institution that works only in the Caribbean? I see that it is registered in Bahamas? Would its coverage expand to Africa, especially African farmers?