The most common regulatory reports require regulated FSPs to fill out and submit quantitative reporting templates that follow the frequency, formats, and content prescribed by regulation and determined by the MCS’s needs. Subsequent analysis by the MCS may involve interrogating aggregated higher-level data or granular detailed data.

Regulatory report analysis helps an MCS to be responsive enough to identify, understand, monitor, measure, and address consumer risks and outcomes; competition issues; and issues of compliance with consumer protection regulations. It also supports effective risk-based supervision by helping to prioritize supervisory programs and resources based on assessed risks.

Imposed regulatory reporting also has the potential to trigger some level of self-analysis by FSPs with respect to their compliance performance and treatment of customers. This especially applies to qualitative reporting. In fact, some countries impose regulatory reporting that requires self-assessment (e.g., under the purview of South Africa’s Financial Sector Conduct Authority, Conduct of Business Returns are imposed on insurance companies).

The benefits and opportunities that stem from aggregated higher-level data analysis include:

The benefits and opportunities of analyzing granular data include:

In Mexico, a 2015 demand-side financial inclusion survey revealed a gap in account ownership and use of a range of financial services. As a result, the Mexican pensions regulator, CONSAR, studied the disaggregated data it collected from FSPs through regulatory reporting. The data confirmed the survey results and showed that women were not only saving lower amounts for retirement but also saved less frequently than men, likely due to lower wages and higher job informality. This increased the risk women faced in not meeting minimum pension rights requirements. On average, for every 100 pesos a man receives in retirement a woman receives only 70. These insights only came to light through disaggregated data. Based on these findings, CONSAR engaged in a public awareness campaign with media outlets and developed a series of programs to promote retirement savings. One program specifically focused on formalizing domestic workers (a majority of whom are women) and providing them with access to pension benefits and insurance. It also established a women’s microcredit program that includes funds earmarked for retirement.

Characteristics of this tool

In terms of level of detail of data collected, regulatory reporting falls into two categories:

The level of data granularity varies across countries and across regulatory reporting templates. Most templates require aggregated rather than granular data because implementation of aggregated data reporting is usually less complex for both MCSs and FSPs. However, MCSs are increasingly shifting at least part of their data collection efforts to granular data. The two levels can coexist for different data, and an MCS may use either one for a standalone project such as a thematic review.

Aggregated data can be defined as data reported after they are compiled from an FSP’s various systems and aggregated through calculations determined by an MCS. For instance, if the MCS requests a quarterly report on total number of complaints divided by number of deposit accounts, the FSP makes three simple calculations:

1. Sum the total number of complaints received in a quarter and registered in the complaints management system.

2. Sum the total number of deposit accounts at the end of a quarter recorded in the core banking system.

The resulting figure is reported to the MCS as a single number that becomes one of many data fields in a reporting template. It is an aggregated indicator. If the MCS had asked for reporting of the data points of steps 1 and 2 rather than the final division from step 3, this would still be considered aggregated reporting but at a lower level of aggregation (and a higher level of granularity). The MCS itself would be responsible for calculating the final division (step 3) after receiving the data points from steps 1 and 2.

Granular data produces aggregated data. It is the closest in level of detail to the data an FSP produces on an ongoing basis as part of its business operations. For example, an MCS that wants to quarterly monitor an indicator on consumer risk may choose to collect and monitor the number of complaints received divided by the number of loans. (This indicator relativizes the number of complaints to account for large FSPs that facilitate more transactions, have more customers, and invariably amass more complaints). The MCS has the following options for gathering the indicator:

An MCS may feel more inclined to collect ready-made aggregated data (options 1 and 2 above) as these data require the least amount of resources. However, they are the most rigid and offer the MCS no room to perform other types of analysis. Granular data (option 3) allow the MCS to not only recreate the ready-made data but to run other data queries, conduct additional and deeper analyses, spot broader sets of patterns and issues, and construct additional or alternative indicators based on supervisory needs.

FSPs usually send regulatory reports by manually or automatically entering data then transferring data files into a centralized database at an MCS or other third party (e.g., through a web portal or a downloadable software solution). Some small FSPs, such as community-based providers, may be permitted to manually send reports to the MCS (e.g., via email attachments, faxes, or hard copies by mail). Technology-enabled methods such as pulling or viewing data from FSP operational systems using application programming interfaces (APIs) may also be used, however, they are less common in developing economies as they require investment. Nonetheless, supervisory technology (suptech) creates opportunities for MCSs to increase the scope, granularity, accuracy, and timeliness of regulatory reporting once fundamental frameworks and strategy are in place.

How to use this tool

There is no single recipe for implementing a regulatory reporting regime or for choosing a data collection mechanism, as the many options fall somewhere between collecting hard copies and using automated methods powered by suptech. However, there are five common steps MCSs can take:

Before implementing a regulatory reporting regime, an MCS should identify its goals and objectives to determine which data are needed. CGAP’s paper Data Collection by Supervisors of Digital Financial Services (2017) provides guidance on how to design new reporting requirements, especially for digital financial services (DFS). In the context of market monitoring, the MCS maps data needs to its policy goals and supervisory objectives.

IDENTIFY INDICATORS AND DATA POINTS TO BE COLLECTED

Only after goals and objectives have been identified does the MCS identify the indicators required to fulfill them and, importantly, the underlying data points necessary to build each indicator. It is critical to continue past the identification of indicators since some data points will be used as multiple indicators and may be required by more than one department within the MCS.

The following example illustrates this point. While data points B and C are both “total number of e-money accounts,” they are used to build different indicators:

The main questions the MCS needs to address in this step:

Designing reporting requirements depends on the type of data collection mechanism in place. In most countries, the mechanism uses traditional reporting templates—often in a table format that indicates which data fields an FSP needs to fill out. The templates include instructions for filling out each field and a clear definition of each term mentioned.

CHECK OTHER SOURCES AND COORDINATE OUTSIDE THE AGENCY

Along with data and information already collected by other departments, the MCS can benefit from data generated by other agencies and third parties. It should take into consideration these other sources and arrange to access them, which may require interagency coordination agreements.

Data sharing is often a two-way street. The MCS may both collect and share data with other agencies as part of its interagency coordination agreements. In Mexico, for example, the National Banking and Securities Commission (CNBV) shares consumer-relevant data with the National Commission for Financial Consumer Protection (Condusef). Policy makers promoting financial inclusion may be interested in data collected by the MCS, and the MCS may allow other parties, such as researchers, to use supervisory data under its terms of confidentiality.

DESIGN A GUIDE FOR ANALYSIS THEN CONDUCT ANALYSES

It is good practice to provide supervisors with guidance on how to conduct analyses. The main types of analyses that use regulatory reports for market monitoring purposes include:

One aspect to consider is the fundamental difference between prudential analyses and market conduct analyses, even if the source data or information are the same. Prudential supervision strongly focuses on quantitative analyses to check compliance with a range of quantitative ratios and to understand financial soundness and systemic risks. On the other hand, market conduct supervision—including market monitoring—makes judgements on the fairness of conduct and the treatment of financial consumers.

It follows that an MCS should combine various reporting data types, sources, and formats. No single source or type of data should be analyzed in isolation; in addition to quantitative data, it is essential to leverage qualitative information and supervisory judgement.

For example, the MCS may want to explore whether declining profitability across FSPs, as reflected in financial statements, is leading to misconduct and unfair treatment. However, since looking at financial data is not enough, it can be combined with nonfinancial data such as complaints data. For example, an increase in complaints about unauthorized debits may indicate that FSPs are intentionally duplicating fee charges or adopting poor practices to make up for declining profits elsewhere. Combining aggregated data with granular data, financial data with nonfinancial data, and structured data with unstructured data results in richer supervisory findings.

The following examples discuss analyses that use key operational and financial aggregated data. 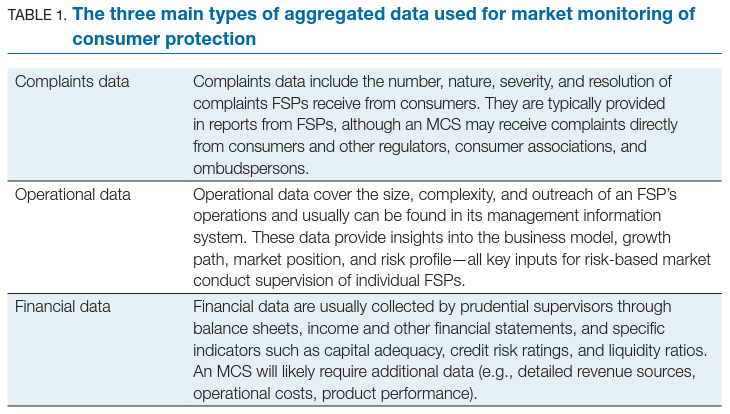 Please refer to this toolkit’s section on analysis of complaints data.

These data help an MCS prioritize which products and FSPs should receive greater attention. The MCS can use the data to identify which FSPs are outliers or important players; to keep an eye on salient market features (e.g., frequently used products and institutions, services that most frequently reach low-income customers and women); or to track new offerings, especially those the supervisor has classified as complex.

Examples of these types of analyses include:

Market monitoring can produce a range of outputs—from standardized periodic reports for internal or interdepartmental consumption to external dissemination of statistics and analytical reports which can be used by stakeholders that have an interest in monitoring financial consumer issues. The range and frequency of outputs is usually constrained by capacity. In either case, it is useful to define in advance key outputs that will be periodically produced, and provide staff with guidance on their format, tone, and content. Special or sporadic outputs may also be produced.

Limitations of this tool

An important limitation of both types of regulatory reporting analysis is the difficulty of ensuring data quality. In particular, it may take considerable time after a new reporting requirement has been implemented for collected data to reach acceptable levels of data quality. An MCS may need to coordinate with other supervisors and IT specialists to check regulatory reporting quality. These actions may include reviewing how FSPs fill out and validate data reporting templates prior to submission and reviewing validation performed by the supervisory agency itself upon data receipt.

The main limitations of granular data analyses include:

While analyzing regulatory reports is arguably the most important market monitoring tool, combining it with other tools (like social media monitoring or phone surveys) leads to more effective market monitoring. Different tools complement and reinforce each other, and positive consumer outcomes and changes in market practices depend on how an MCS uses tools, combines them with other evidence, and takes timely action to generate changes in market practices, reform regulations, clarify supervisory expectations, and penalize poor conduct.