The gender gap in the use of digital technology has narrowed in recent years, but women continue to be at a disadvantage. For instance, today in low- and middle- income countries there is a gender gap of 8 percent in phone ownership and 20 percent for smartphones. While there is often an assumption that the gender gap will disappear on its own as digital technologies become more widely available in a market, the reality is that men and women engage differently with digital services – including digital financial services (DFS) – because of, among other factors, gendered social norms that don’t change nearly as fast as technology.

Social norms are shared expectations held by a community or society about how people should behave in certain environments. Gendered social norms, a subset of social norms, prescribe different roles and expectations to men and women in households, communities, markets and public life. For instance, women are often expected to stay home and care for their families instead of owning assets or running large businesses.

Gendered social norms can also restrict women’s ability to access and benefit from DFS. CGAP has been researching the digital divide out of a concern that advances in DFS could potentially exacerbate, rather than close, gaps in the access and use of digital technology between privileged and underprivileged groups around the world, including women. Our research highlights four key dimensions of the digital divide: access to handsets, internet connectivity, infrastructure, and literacy and data availability. 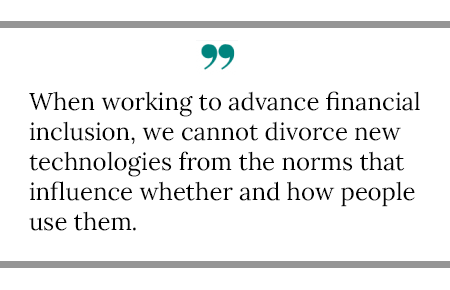 It might be tempting to think of these dimensions as gender neutral. After all, handsets are handsets regardless of who’s using them. When infrastructure is built, it covers large areas home to both men and women.

But the reality is that gendered social norms are at play in each of these dimensions. They affect the actions, perceptions and expectations of individuals and groups and give rise to gender-specific constraints in people’s financial lives. When working to advance financial inclusion, we cannot divorce new technologies from the norms that influence whether and how people use them. For example:

The digital gender divide is unlikely to close by itself, given that it is largely driven by normative barriers. Despite some progress, the digital divide has remained steady or is on the rise in many countries, which strongly suggests the need for more gender-intentional approaches to financial inclusion that consider the normative barriers to women’s access and use of DFS.

Within the context of the COVID-19 pandemic, there is a need right now to ensure digital cash transfers meant to help people through the crisis are intentional about addressing the normative barriers faced by women, who are disproportionately impacted by this crisis. As the 2013 to 2016 Ebola crisis showed, there is always the potential for the “tyranny of the urgent” to cause stakeholders to deprioritize gender analysis and action.

Longer-term, it will be important for the financial inclusion community to focus on addressing the social norms underlying the various dimensions of the digital divide, starting with access to handsets.

For example, according to CGAP analysis on GSMA data, by 2025, virtually all mobile connections — across regions — will be on 3G or even faster networks as smartphones become increasingly ubiquitous​. However, CGAP projects that a gender gap will remain on both smartphone uptake and mobile data use, and that 25 percent of mobile connections in less developed countries may remain on a basic or feature phone. Without a gender-intentional approach, these remaining gaps are likely to disproportionately affect women living in extreme poverty.

For women, smartphones can open up significant opportunities, but access isn’t inevitable. Without specific targeted efforts to get phones into the hands of the most vulnerable women we will not make the requisite progress for women’s financial and livelihood opportunities. Efforts to address the digital gender gap are costly, time intensive and require creativity. Where have we seen great examples of such efforts?

What do you think is the best approach to closing the digital gender divide? What efforts have you seen work? In the comments below, please share your thoughts and experiences. In particular, please let us know if you are aware of any initiatives that have attempted to improve access to devices by giving them away or reducing prices. In a follow-up blog post, we will explore such efforts and their success to date.