Recent research by the Boston Consulting Group covering six markets (Indonesia, Pakistan, Bangladesh, Tanzania, Kenya and Uganda) found that at least 80 million people are more than 5 km away from a CICO point. It concluded that reaching them would require an additional 115,000 CICO agents.

Notably, the study also concluded that 90 percent of the new CICO agents would be both economically and operationally unviable with the current agent business models.

To address this gap, financial services providers can and must innovate with their business models. Over the past year, CGAP has been researching the possibilities and limitations of different agent network models around the world. As detailed in our recent publication, “Agent Networks at the Last Mile” (2019), the models that are most successful in expanding coverage in rural areas are the ones that enable the aggregation of many valued services at CICO points. This generates more transactions per customer and, consequently, more revenue streams for all agents, including those that operate in places with lower population densities. 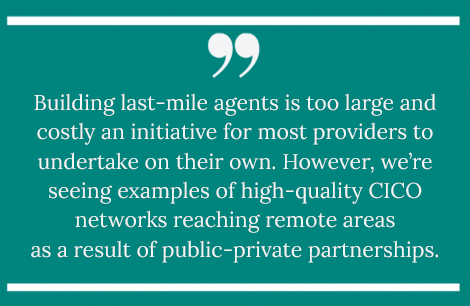 Leading providers are achieving this service aggregation in different ways depending on market context. For example, e-commerce companies in China have been especially successful at building agent networks that support transactions for the many financial and nonfinancial products offered by providers on e-platforms. Several companies are attempting a similar model in Indonesia and are starting to show promise. In Kenya, leading mobile network operators and banks have diversified their own product offerings enough to allow their agents to process more transactions per client, even when these agents may be exclusive. In Colombia, third-party companies have become agent network managers that lead the distribution of products and services for many banks and other nonfinancial services providers, which also results in more transactions per client for their agents.

In these more successful agent network models, the diversity of services offered by agents is key to helping agents generate more transactions per client, but the quality of those services also matters greatly. Afterall, costumers don’t use services they don’t value.

Our research also shows that in most markets, building agent networks in the more remote rural areas is too large and costly an initiative for most providers to undertake on their own. However, we’re seeing examples of high-quality CICO networks reaching remote areas as a result of public-private partnerships.

What’s happening in India is a good example. India’s government has supported rural coverage by channeling government-to-person (G2P) payments through the same agent networks used by private-sector providers. This adds public-sector services to the mix of services offered by private providers. Often, these are independent agent network managers, such as Oxygen or PayNearBy. India shows how policy makers can leverage social programs and public infrastructure to diversify the mix of services offered by CICO agents, increasing their earning potential and viability in remote areas.

Another example can be found in China. Alibaba’s Rural Taobao program has rapidly expanded the company’s agent network to 30,000 rural villages and increased use of the Alipay platform and financial services. Even customers without smartphones can cash out and access services such as credit, savings and insurance through the agents. The Chinese government has indirectly facilitated the Taobao agent network’s expansion through rural capacity development programs. These programs educate rural entrepreneurs about the economic opportunities that new digital economies bring for agents and customers. They also help them to develop agent management skills and internet literacy.

The Boston Consulting Group identifies three types of levers that government can pull to catalyze the rural expansion of agent networks:

The choice of which levers to pull will vary by country. In all cases, there needs to be a concerted effort by all stakeholders in the market to create conditions that are viable to both the provider and the agent.

For policy makers, this means tasking government agencies with the implementation of subsidy programs that focus on CICO network innovation and expansion. Regulators also have a role to play by allowing stakeholders to experiment with new CICO agent models.

Agent Networks at the Last Mile: The Role of Policy Makers and Regulators

In this webinar, expert panelists discussed key findings from CGAP’s research on rural agent networks, with a focus on emerging lessons for policy makers and regulators.