By
Sharmista Appaya, Ivo Jenik
Share
Blog Series
Regulatory Sandboxes: What Have We Learned So Far?

Last month, Utah became the second American state to announce the creation of a regulatory sandbox, bringing the total number of sandboxes (operational or announced) globally beyond 50, and it is likely that before this blog is published a couple more could be announced. While it is not entirely clear that sandboxes drive transformational change, there is evidence that they have become an important vehicle for regulatory monitoring and incremental change, sometimes bearing ties to financial inclusion efforts. Notwithstanding their impact on regulatory objectives, their growing popularity is reason enough for the financial community to build an evidence-based understanding of how and why regulators and innovators are using them.

To bring to the fore tangible evidence and insights from global sandbox experiences, CGAP and the World Bank Group conducted a joint survey between February and April 2019 on regulatory innovation facilitators, including accelerators, sandboxes and innovation hubs. We collected 31 responses from regulatory agencies in 28 countries, including jurisdictions in Africa, the Americas, Asia and Europe. The results are available here, and some of the key findings are highlighted below.

Nearly 85 percent of the regulators we surveyed stated that their motivation for setting up a sandbox or other innovation facilitator was to keep up with the markets and to learn about emerging innovations. However, they also shared other motivations, including the need to drive competition and attract more innovators to domicile in their market.

These benefits come at a price. Survey results correlated with desk-based research revealed that the sandboxes that were more active and engaged with the fintech community had invested considerably more in terms of human and capital resources. In a large proportion of jurisdictions, the payments or banking supervision department had responsibility for maintaining the innovation facilitator.

The survey revealed a significant variance among the regulators in terms of human resources committed, ranging from 1 to 25 full-time employees. Three quarters of the respondents tapped internal resources (73 percent) rather than new hires. There was a wide range in the financial resources dedicated as well, with figures from $25,000 to over $1 million. This discrepancy could be due to the fact that some but not all jurisdictions included the salaries of staff dedicated to the sandbox. Nearly all respondents used funds from their core budgets, and only one jurisdiction indicated that that it charged application fees for entry into the sandbox.

Not surprisingly, jurisdictions with the largest budgets and the most full-time employees dedicated to the sandbox accepted the highest number of applications, highlighting the fact that sandboxes can be highly resource intensive if they are to deal with demands from the market.

From the perspective of the regulators we surveyed, the most significant way industry benefits from sandboxes is by receiving regulatory guidance that helps innovators navigate the complex legal and regulatory requirements governing the financial industry. However, the waivers and other sandbox tools offered to new entrants also scored highly. It was also noted that innovation hubs and accelerators have a larger impact than sandboxes in terms of the number of firms they have interacted with and supported since inception. This may reflect the fact that they are less resource-intensive regulatory options.

How do sandboxes affect the regulatory environment for financial services?

The survey also showed that regulators do not limit sandbox access to new fintech entrants alone. An equal number of the survey respondents allowed authorized incumbents to test new business products. Permitting incumbents to use sandboxes has consequences for maintaining a level playing field and can be argued both for and against.

In line with the Bali Fintech Agenda, we promote the idea of “same activity, same treatment,” implemented in the context of risk-based regulation, as a good mantra by which to approach all new business models, applications, processes and products. While most jurisdictions reported that the sandbox process resulted in full authorization for successful firms or led to regulatory changes that supported innovation, there has been little quantitative evidence to date that sandboxes drive substantial regulatory changes. Instances like the Central Bank of Malaysia’s adoption of eKYC rules suggest that sandbox testing may generate insights that inform regulatory change, though they may not necessarily initiate change.

Exit Process at the End of a Sandbox Test 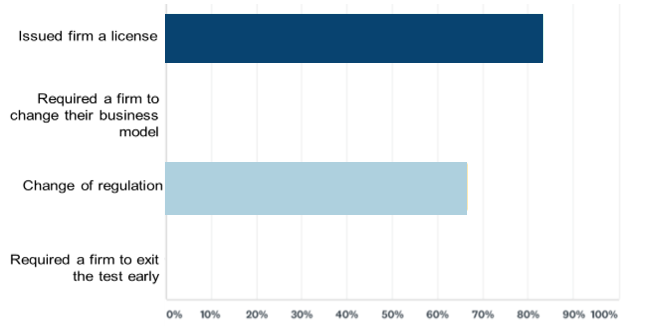 Regulatory sandboxes are just one tool in the toolbox

Innovation facilitators, particularly regulatory sandboxes, remain a popular tool assisting regulators in their quest to better understand the shifting landscape of digital financial services. We predict that sandbox-like initiatives will continue to emerge around the world for a foreseeable future, although they are likely to eventually morph into more permanent fixtures and become a regular part of the licensing process.

Based on the survey, we concluded that, despite their limitations, sandboxes can be a useful tool for incremental innovation and changing institutional culture when they are designed for a specific context and with a clear set of policy objectives. However, it is important to remember that sandboxes may not always be the best or most practical option. They should not be used as the only response but as part of a suite of tools and responses available to the regulator. While sandboxes may support regulatory change, they are unlikely to replace the need for bolder, transformative changes that depend on a wider, all-encompassing ecosystem.

See the full results of the CGAP and World Bank survey on innovation facilitators here. This post is part of CGAP's "Regulatory Sandboxes: What Have We Learned So Far?" blog series. The series takes a critical look at the concept of the regulatory sandbox and how it has evolved in different parts of the world. The results are available in this slide deck. More regulators are experimenting with "thematic sandboxes" that are designed to advance a specific policy goal. Here are three types of thematic sandboxes we've seen emerge over the past year. Regulatory sandboxes usually evolve over time. Why not start with a simple version that's easy to update based on user feedback?
View Full Series