Rural agent business models can play a critical role in expanding financial inclusion. As part of CGAP's Agent Networks at the Last Mile initiative, we’ve identified providers across the world that have been successful in developing such models at scale, therefore playing a critical role in furthering financial inclusion. Bancolombia, the largest bank in Colombia, is a great example.

From 2008 to 2021, Bancolombia increased its client base fivefold to 17 million customers. This success was largely due to the bank’s ability to create a vast agent network combined with a strong sales force, reaching almost every municipality in Colombia. During this period, the bank’s agent representation went from 8% to 29% of all agents in the country; and its footprint increased from 18% to 95% of municipalities. By 2020, Bancolombia agents processed 83% of all customer transactions made through this channel in the country.

Bancolombia's experience cannot be isolated from Colombia’s broader financial inclusion trajectory. In 2006, the Colombian government launched the National Financial Inclusion Strategy, with agents forming a cornerstone of the initiative. As a result, account ownership has increased from 56% in 2008 to 90% in 2021 (National Financial Inclusion Survey). Even more impressive, by 2016, every municipality in Colombia had at least one agent.

Bancolombia’s approach is unique in that the bank recognized early on that agents were critical to its core growth strategy and that a strong accompanying sales force would allow agent viability, especially in rural areas. It has been the only private bank in the country to spearhead using agents as its growth engine. Furthermore, the bank’s thoughtful approach around product development and agent viability has allowed for an enviable number of transactions per agent and a well-balanced Cash-in, Cash-out (CICO) ratio at the agent level, which is critical for liquidity management in rural areas (see figure below).

Because of previous mergers, by the early 2000s the bank had a wide branch presence but increasing challenges around economic viability. The bank’s first "agent" came on the scene serendipitously as a response to those challenges: to increase sales, an entrepreneurial branch manager started visiting neighboring rural municipalities to sell Bancolombia's products to individual customers. This approach was successful in building demand in smaller municipalities that later drove transactions at the branch level.

When regulation eventually allowed for the use of agents, the bank was well-positioned to scale this approach nationwide and created a sales force dedicated to building customer demand in smaller municipalities and, in parallel, designating agents to process customer transactions. Sales agents also helped local agents balance their liquidity. Although the main agent model has evolved, these sales agents still exist.

In the first iteration, the bank directly identified, recruited, trained, and managed its agents. All agents were exclusive to the bank. This strong oversight guaranteed that independent of the channel, customers could seamlessly access all of Bancolombia's products and the bank could ensure the quality of its services. Through this model, Bancolombia grew its footprint from 50% of the country’s municipalities in 2008 to 73% in 2012.

In 2012, Bancolombia decided to outsource agent onboarding and management to third parties due to increasing customer demand. It then designed four different outsourcing formats, each with specific strategic objectives, revealing Bancolombia's deep understanding of customer segments and local economic dynamics. See the table below: 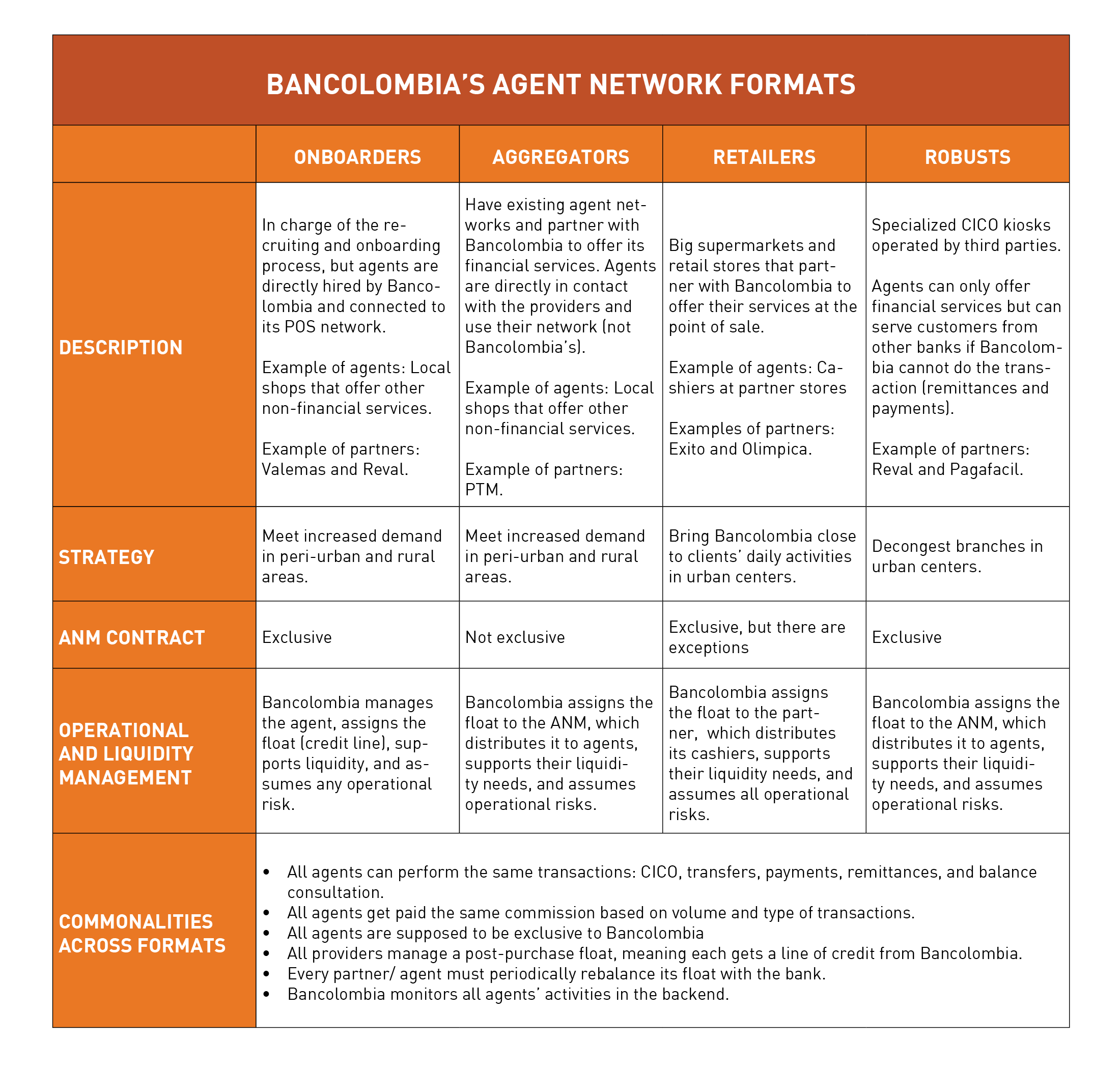 Onboarders have become the bank's champions as far as physical presence and offer Bancolombia the tightest control over customer experience. Onboarders help identify agents and compile their due diligence documents, but Bancolombia contracts these agents directly. Over 60% of agents operate under this model, particularly in rural markets.

Aggregators own their network of agents and have a single contract with Bancolombia for their agent management services. They have recently acquired more market share in rural areas thanks to the greater economies of scope by representing Bancolombia and other non-financial service providers like airtime, fast-moving consumer goods, streaming services, and e-commerce.  The diverse services that aggregators offer help improve agent viability outside urban dwellings.

Retailers refer to supermarket chains that work similarly to a franchise and account for the lowest volume of transactions of all formats. With that said, they have been vital to the model as they are closer to customers' daily activities in urban centers.

It is important to highlight that Bancolombia requires agent exclusivity from all its partners. Nevertheless, as competition increases, it has become a challenge for the bank to maintain these arrangements and it has started to give some concessions.

A focus on product development for low-income clients

The reason why Bancolombia was so intentional in expanding its agent network all along was its decision to become a bank for the low-income masses. This implied not only enabling agent proximity but developing services that were of value for this segment and ensured high agent activity rates. The "Ahorro a la Mano" (ALM) portfolio has been Bancolombia's flagship for financial inclusion and agent viability. In 2013, Bancolombia launched ALM as a digital savings account for low-income clients and rebranded its agents as Bancolombia a la Mano (BALM) to reinforce the intimate relationship between product and channel.

To build into this market, in 2015, the bank launched "credito a la mano" to offer low-value loans to ALM clients, and, in 2016, partnered with an insurance company to provide such products to this segment. In 2018, the bank launched the BALM App, specifically designed for its low-income consumers. As of 2021, BALM had over 6 million clients. The success of this portfolio was only possible with the trusted presence of agents that helped customers in every geography to open accounts and learn how to use them.

Staying ahead of the game

Bancolombia's pace of innovation is continuously meeting its customers' demands. More recently, Bancolombia was a pioneer in launching QR codes for merchant payments. Their proliferation created another serendipitous moment for the bank when it realized that taxi drivers were offering cash-out services to their riders to balance their own liquidity needs. Bancolombia is now piloting an initiative with the company Taxia to formalize this new “mobile” agent model.

Read more about Bancolombia's story in this case study. Universal coverage is a fundamental building block toward universal financial access. Last year Colombia announced that all of its 1,100+ municipalities had at least one banking agent serving customers in need of financial services. How did Colombia do it? Who Should Pay for Banking Infrastructure in G2P Programs?

In 2006, 300 of Colombia's 1,100 municipalities had no access to banks. Now, 99% do. Incentives, while not enough to stimulate investment by private financial institutions in all remote areas, played a significant role in helping to build agent networks througout the country.